Day 14 of the Heblish Challenge and we’re going to have an exciting day.

In our previous lessons we talked about “numbers” and the special use of the numbers e^ad and shtaim (one and two).

You might ask yourself why I used e^ad which is masculine, and shtaim which is feminine, when I spoke of the abstract numbers in the above sentence.  (An abstract number is a number that does not count nouns.)

The answer is: solecism (a solecism is a common error).

The rule in Hebrew is – unless we are counting nouns, we use feminine numbers when we are simply counting or calculating, and also for telephone numbers, paragraphs, houses, buses, pages, or section numbers. We can (but we don’t have to) add the word “mispar” (number) before the number, as in “amud mispar shtaim” (page no. two).

But, as I said before, there is a solecism for the number one, and most Israelis use the masculine number one, e^ad, even when all the other numbers are feminine.

– One, two, three, four… ten. –  E^ad, shtaim, shalosh, arba, ^amesh, shesh, sheva, shmone, tesha, eser (all feminine numbers since we are simply counting, except for the masculine number one – e^ad)

– Please, open the book to page 9 – Bevakasha, open the sefer to amud tesha.

Today is going to be a cool lesson, because we’re going to talk about the simple tenses in the Hebrew language and play a little game.

Today’s menu: Tenses, some new words (number, page, bus, only, in) and a game

We know that English has 7 tenses, such as: Past simple, past progressive, present perfect, future tense, etc…

In the Bible there are only two tenses… yes, only two (ken, rak shnaim,) past and future. There is no (ein) present tense in the Bible!

But modern Hebrew has shlosha (three) tenses: Past, present and future.
For those who asked me, Japanese also has 3 main tenses: past (過去), present (現在) and future (未来).

In lesson 9 we learned how to say “I want, I see” and “I understand” which are in the Present Tense.

When we speak in the first person past tense, it becomes simpler because there is no gender.

And now you have a small crossword-puzzle… 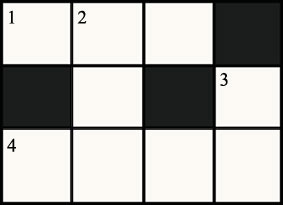 We learned a lot today and I hope you enjoyed the lesson.