The last 10 days have not been easy, to say the least, in our area – the Middle East.
Thousands, hundred of thousands and even millions of Egyptian citizens went out to the streets in Egypt and called for President Mubarak to resign. Also, King Hussein of Jordan dissolved his cabinet and asked for a new government to be formed, making this the third government collapse in the Middle East, including Tunisia, in recent months.  Why am I telling you about this in our Heblish lesson? The answer will not tarry to come…

In our previous lesson we learned about “at” and “on”, and I showed you that a translation between languages is not always like comparing apples to apples.

After two complex lessons, today we have a short lesson.

Most of the leaders in the Middle East are tyrants. Except in Lebanon, all the other countries around Israel are dictatorships.

Most of my students live in a democratic country, and it will be easy for them to answer “yes” to this question.

But, most of us don’t take into account the people in those countries, the culture, and radical Islam. To be a democracy is not like just pushing a button. It’s a long process. In Turkey it took 85 years(!) of military regime to achieve a democracy. But even if it could be a short process (like an election), no one can guarantee that the side which wins the election won’t be cruel to its people, like we see, for example in Iran.  Hopefully it will work out better in Egypt.

A lot of people in Israel are afraid now, and ask “what will happen to the peace agreement we have with Egypt?” No one has an answer and I won’t talk about politics, today. I just want to say that most normal people want peace. The Hebrew word for peace is… someone can guess?

Well, the answer for my last question is that in Hebrew, the word for peace is shalom.

I already taught you that we say shalom for “hi” and “hello,” but now you know that there is another meaning for the word “shalom,” which is peace.

In Hebrew “hi, hello and peace” are blessings – blessings for good life, which is pronounced in only one word – shalom. 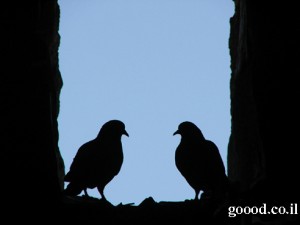 Some expressions with the word “shalom“:

That’s it for today… short, but under the current world circumstances, a very timely lesson.

Peace can be as simple as having all your kids under the roof with you, safe and happy, or as complicated as neighbors who have thousands of years of animosity between them, trying to figure out how to live in peace with each other, and prosper.

Today, I pray for shalom in the Middle East, and in the every corner of the world where man reaches for something better than his ancestors had…