Day 12 and today we are going to shop.

In our previous lesson we talked about the numbers one through twelve and I also gave you 6 new words to learn, because I’m guessing that if I talk to you about “dress” (simla), “bracelet” (tsamid), “ring” (tabaat), “bottle” (bakbuk), “cake” (uga) and “book” (sefer), you will probably stay alert…  😉

Today we are going to learn how to ask for a number of objects, since one dress is never enough … and one more thing; even if it’s not so easy – Don’t give up!

The following blackboard is familiar to you from lesson 9, where I showed you that to say: “for me one fish” in Hebrew, you should put the number “one” (e^ad) after the noun “fish” (dag): bishvili dag e^ad. 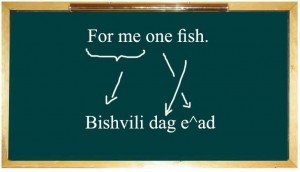 The same is true for feminine nouns:

As you can see, the number “one” comes after the noun.

Since men feel like zombies during a shopping spree, we will leave them at home and let the women do the shopping today.  So, all the questions below are asked by a woman.

When you use the plural in English, you usually put an “s” on the end of the noun. In Hebrew it is different, but we are not going to learn that right now, because today we are concentrating on the numbers we’ve learned.

Here is the table from our previous lesson. (You can always find it here: Numbers).

Now, we will add the nouns:

You can see from the tables above that with the exception of the number “one” that we already learned, when counting nouns in Hebrew the numbers come before the noun, just as they do in English. We didn’t show you how to use the number “two,” because it is another exception and we will talk about it in our next lesson.

I have shown you some examples using Hebrew numbers, but I still owe you the usage for the number “two”.

In our next lesson we will have a lot of repetition and the exceptions I owe you – but if you want to strengthen what you’ve learned up to this point, write some sentences using the numbers 1 through 12, send them to me and I will correct them if needed. Take it as homework 😉 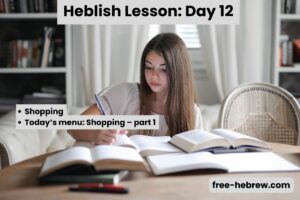